The Terrasigna website uses cookies (data stored on your browser) to customize content and to analyze traffic.
You can set preferences for browser storage while using this site by selecting from the settings below and clicking Save.
For more information on how data is stored and used on this site, please review our Cookie Privacy Policy. 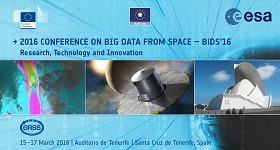 Between 15 and 17 March 2016 TERRASIGNA participated in the Conference on Big Data from Space jointly organized this year by ESA, SatCen, and JRC, in collaboration with the IAC, PCTT and the Council of Tenerife at Auditorio de Tenerife, Santa Cruz de Tenerife, Spain.

Mr. Florin Serban, Managing Director of TERRASIGNA chaired the session on “Big Data Impact on Industry”, as a recognition of TERRASIGNA’S significant contribution within the processing data domain. Given his activities in “big data from space” and the experience in developing educational software, Mr. Florin Serban was also invited, as a member of BDVA, to carry, on behalf of the association, the presentation “Education and Skills: Perspectives from Big Data Value Added Association - BDVA” within the session “Data Science Skills”.